A wandering merchant with a variety of goods, common, exotic, and everything in-between. A worthy ally...or a potent enemy.

Not a lot is known about the merchant called Ahziz. His life is full of holes, stretches of time when he simply disappeared from society’s records, and many have speculated as to where he came from and who he is. But enough is known to tell a story, a story of a man with powerful ambition, and a great heart.

The city of Regalport, capital of the Lhazaar Principalities, has long been a city of intricate balance, a balance between its honest and orderly citizens and the pirate underbelly that dominates their economy. Ahziz at one time played a prominent role in that underground society, captain of the smuggling vessel Swordfish . He was one captain among many, working for a fleet that did roaring business out of a network of sea caves on the Eastern coast of Lhazaar. His head for business made him one of the most influential captains of the fleet. But there came a point in his career when he found himself standing on the razor’s edge and had to make some tough choices. A deal with the corsair king known as Galair The Bloody Fist went sideways; chaos ensued. By the time Ahziz and what was left of his crew teased their wounded ship back into Regalport Harbour, three coastal villages had been reduced to ashes in the corsairs’ furious and wanton search for the smugglers. Stunned and deeply grieved by the loss of innocent lives brought about by his work, Ahziz placed command of his vessel in the hands of his first mate, stepped off the ship onto the Regalport wharf, and retired.

Once a salesman, however, always a salesman. Within months of leaving his life of less-than-legal trade behind, Ahziz set up shop in Regalport’s slightly unsavoury mercantile district, The Pirate Exchange. His reputation grew rapidly. Having made contacts far and wide across Khorvaire over the course of his previous career, Ahziz made a name for himself as the merchant who could goods from anywhere on The Continent faster than anybody else. Nobody knew how he did it, or who his handlers were, or what routes he used, but his goods moved unseen from source to destination faster than any other merchant could manage. And Ahziz was fearless. Not only would he risk bringing goods from ports as far removed as Sharn and Stormhome, but he would, for a price, of course, bring more exotic wares from dangerous and secluded places, even Newthrone in the depths of Q’Barra’s jungles. Business was good in Regalport, and with time Ahziz became an established citizen, settling down, even getting married. His life was simple, honest, and exciting until the day his wife was murdered, and his world turned upside-down. (See Interlude: Ahziz’s Story in the Adventure Log)

It took Ahziz a long time to come to terms with his exile from the Principalities. He was being banished from the only home he had ever known for having taken an innocent life, something he had sworn never again to bear the responsibility for. He departed from Regalport with a heavy heart, but not without friends. In the turmoil that had swept the city and claimed his wife’s life, fellow merchants had joined Ahziz to confront the corrupt guards that were threatening their business and their families. Acquaintances had become allies. Many had shown him kindness in the days approaching his trial, including one roguish-looking fellow backed by a group of battle-worn friends who had befriended him in the streets earlier that week. He said he’d heard Ahziz’s name somewhere, and wanted to meet the man. The fellow had later visited him in prison and offered him help should he ever be in need of it, adding that he and his comrades were headed…North.

The northern lands are and always have been dangerous territory, but one doesn’t live to a ripe old age in Regalport without being tough as boiled leather and twice as hard to stick a knife in. So now, unattached to house or guild, Ahziz wanders, a freelance merchant with a broken soul. He has sworn to help those who need it, and to aid those who do so for him. He is northbound to seek a new beginning, and to find an unknown end. And after that, after the icebound lands have released him and he has played his role…maybe Sharn. There is good business in the City of Towers, and fair winds in The Hilt. 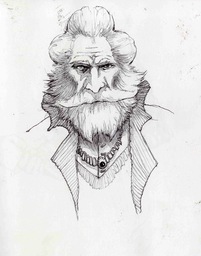